The first version of the Beam controller used a software clock running from a second crystal (a 32767 Hertz watch crystal).

This approach was satisfactory but it had the disadvantage that the time had to be reset after each power up. Not an issue if the shack unit was permanently connected to a computer using my Remote software where a single button click reset the clock.

For those who use the controller for EME and want to be able to run everything from the shack unit, it is far easier to just power up the unit and start tracking without a computer.

The hardware clock used is one from Futurlec and is the model DS1307. You couldn’t make it for the asking price of just under AUS$10. It comes complete with a backup battery and makes use of an I2C bus for communications. Here is the circuit for the DS1307.

The modification to the main board of the shack unit is a simple one. Just remove the watch crystal and the capacitors C18, C19 and add the three wires shown. 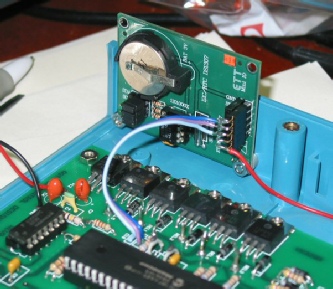 I connected the SDA connection on the clock to pin 15 of the PIC (I used the blank hole for the no longer used crystal bypass capacitor).

The SCL lead goes to pin 16 of the PIC (again I used the blank hole for the other capacitor. The GND lead goes to an unused GND connection for the capacitors.

Power to the module

Be careful: when hooking up check that you do have a +5V location for power.

(1) If you run your LCD backlight from +5V via J8 then R14 will be missing and a source of +5V is available from the unused hole for R14 near J8. Do NOT use the end near the corner of the board as this has +12V on it.

Always check with a multimeter first.

In the absence of +5V the clock runs from its internal battery to keep the correct time.

The shack unit 18F4685 will need to be loaded with the software that supports the hardware clock. See Downloads.

I have learned of another source of clock modules for New Zealand constructors here.

They seem to be double the price of the Futurlec model but may be more easily accessed for Zls. There is a trap. You will need to install 10K pullup resistors to +5V on the SCL and SDA leads. These resistors already exist in the Futurlec version.