There have been minor fixes to improve reliability in different machines and better program flow. No changes were made to the essential algorithms apart from the additions needed to cater for alternate boom and element material shapes. If you run Vista I recommend you run it as Administrator. YC now produces .maa files for MMANA-GAL optimiser.

Features of the free but copyrighted program include: calculation of the element length and element spacings of a yagi for a particular frequency, different size materials for boom and elements are catered for as are different methods of mounting, dimensions of baluns are calculated, there is provision for entering the dimensions of an existing DL6WU antenna for optimisation through an external program or to gather information on its gain, beamwidth etc. A handy SWR calculator and feedline loss calculator are included as part of the package. Stacking information is also provided as are estimates of gain. A helpfile is included that covers many aspects of yagi design as well as helping with the operation of the program.

Note: where countries use a comma for decimals you may need to change your country code otherwise MMANA files will not run. Here’s one solution: http://www.copsmodels.com/gpcommapnt.htm

Yagi Calculator is a Windows program that also runs well on Linux, Ubuntu 8.10 under Wine, to produce dimensions for a DL6WU style long Yagi antenna. Long yagis are commonly used from the 144MHz amateur band to the 2.4GHz band. The DL6WU yagi is highly regarded as being easy to build with repeatable results, broad bandwidth and a useful pattern.

The program on this site was developed in the early 90s as a DOS program. Time moved on and so did operating systems, so the 2003 version was an opportunity to convert to a Windows environment and update the information and modify some of the algorithms. Latest Version is 2.6.19 and reworks the resizing and placement of windows. Version 2.6.17 on 15 July 2015 fixed a bug when restoring a saved file. I’ve also re-arranged a couple of menus. A materials list has been added to the yagi printout to assist with the buying process but be wary that this is a calculated measure and does not allow for saw cuts and wastage from short purchased lengths. 2.6.19 changes compiler only.       The output screen 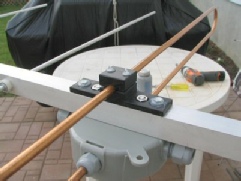 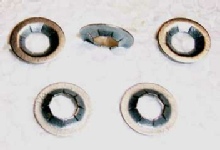 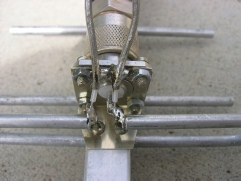 Yagi Calculator is a program to assist with the design of long yagi antennas. It uses the graphs and principles developed by DL6WU and printed originally in the German Radio Magazine VHF Communications (March 1982). The article was titled Extremely Long Yagi Antennas. For best front to back ratio it is recommended that a yagi be constructed with one of the following numbers of elements - 10,14,19,24. Yagi builders are reminded that DL6WU designs are primarily for long yagis. A boom length of 2 wavelengths (or 10 elements) would be a minimum sized antenna. On the other hand, yagis with as few as 8 elements have used the design and worked very well.

The work of David VK3AUU (AR Feb 1988) in developing some equations to fit DL6WU's graphs was very valuable. The reflector calculations are based on a Basic program written by KY4Z and W6NBI and with suggestions by DL6WU. The ARRL Antenna Handbook provided information, as did various sources on the Internet. K5OE's site at http://members.aol.com/K5OE is a particularly useful one.

The author acknowledges the 1998 ARRL Handbook for information on coaxial cable impedance, dielectric and velocity factor.

I acknowledge Kevin Schmidt W9CF (http://fermi.la.asu.edu/w9cf/) for the correction factor for square section rod of 1.18 * cross section of round tube and also for the formula to find the equivalent round cross section for both square and flat element materials (Version 2.5.0)

The formula source for the impedance calculations is from "Round and Square Section Parallel Transmission Lines Theory, Practice and Applications" by Roger Harrison and Andy Sayers VK2AES, GippsTech Conference 2009, Churchhill, Victoria, Australia.

Some valuable comments on scaling and boom diameters from W4RNL

Considerations on the effects of boom diameter by Lief Asbrink, SM5BSZ

Experiments on an antenna range by Jim W6PQL

Various antenna applets and particularly the correction factor for square section versus round rods by Kevin Schmidt.

Some antenna range results by the US National Bureau of Standards

Spring washers used by Steve VA3FM to fasten his elements 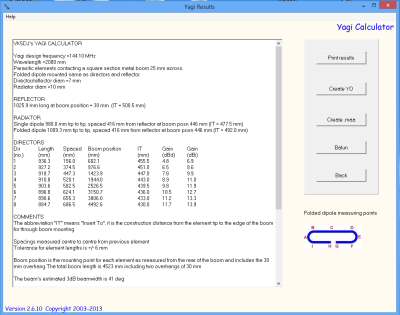 Using Yagi Calculator on a Mac

One user (thanks Kenneth) experienced difficulty getting a correct MMANA file produced using a MAC. The problem is that if you live in a country that uses a comma instead of a dot for indicating decimal numbers your machine (Windows or Apple OS) will output a file for MMANA using commas which will not be recognised by MMANA. The solution in the case of a Windows machine is to set your country preferences to a dot for the decimal point. In a MAC it’s a bit harder. Kenneth couldn’t get it going with Wine but instead used Virtual Box for OSX and installed Windows XP from an iso file. All was then fine as it was possible to adjust country settings.

In the downloads page you’ll find a short form of the Yagi Calculator. This was developed by Jack Dodds VE3UKD from short form code provided by me. This short form is provided with the source code on https://gitlab.com/JackDca/yagicalclx

To run the code just download it into any directory and run it from there. It does not need installation.