The South East Radio Group (SERG callsign VK5SR) has a ham shack which among other things is equipped with a Kenwood TS2000 transceiver and is complemented with an HF beam at about 30 metres and some VHF antennas. The club has instigated a remote control of its station to help new amateurs without transceivers, flat dweller members, or those just with a bad noise problem, to access the HF and VHF bands.

The control system will be via the internet and consist of a Rig-Expert WTI-1 interface which provides access to CAT commands, PTT, and Rx and Tx audio. Internet access will be available from a naked ADSL2+ line.

To make optimum use of the station it was decided that control of the beam was highly desirable, hence this project. The club could have purchased a GS232A Beam Control Interface at considerable cost to interface to the WTI-1 but we are after all a group of experimenters. This project was designed to take the place of the GS232A and at small cost, mostly the case and a few plugs and sockets. The rest of the parts were to hand.

A cable to suit the radio was purchased along with the WTI-1 interface. At the transceiver end it is just a matter of plugging into the TS2000 Rx audio out, Tx line in, PTT and the CAT interface. The WTI-1 itself is set up by connecting a computer temporarily and setting the communication conditions for the internet, users, and passwords with the manual containing all necessary setup information.

The WTI-1 package includes a basic remote communication program (ShackLink.exe). The setup of ShackLink enables PTT, Rx audio, and microphone audio for the user's end.  Com port settings must match those of the WTI-1 end and a fixed IP address is desirable but not essential.

A further control package, Ham Radio Deluxe (HRD), provides good connection to the internet and will be used by our users initially for CAT control. HRD also includes provision for beam control and sends data out to a defined port using a choice of protocols, and in our case GS232A protocols have been chosen which consist of mostly single letter commands.

Command listings are in the HRD manual.

The RS485 adapter (here is one site for purchase) has two connections for the A and B of the WTI-1 adapter, these go to the stereo socket in the WTI-1. RS485 is not a duplex device, therefore it must be switched from receive to transmit by the output from Pin 18 of the 16F1827.

If a user wishes to switch the power of the radio an external driver transistor (similar to the setup on pins 15 and 16) should be used to drive a relay. Sending a “O<CR>” switches power off while “P<CR>” turns power on. Assuming an external transistor, power ON = collector goes low.

Special thanks to Brian VK5VI for making my hand drawn circuits look professional. Brian also did the layout for the vero board. 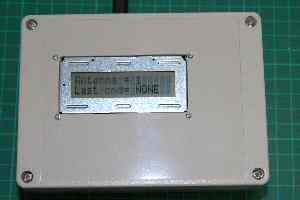 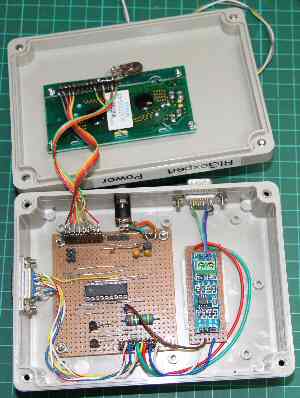 Below is the Vero Board PIC16F1827. This is the prototype and so the relay lead and the switch for the RS485 board has a direct connection to the board rather than output pins. The RS485 to TTL board is to the right.

The RS485 connector is a DB9 female while the output DB9 to the left is a male DB9. Power at +12V and Gnd comes in a power connector at top.

The WTI-1 has an RS485 port that may be used for a number of purposes and this has ben utilised as the beam controller port. In the club’s model WTI-1 (Series 3.1) it was necessary to install a 3.5mm stereo socket (see the WTI-1 website for specifications). It’s a pity that RigExpert chose not to install this simple part.

The controller interface consists of a PIC16F1827 to read the commands from the Rig-Expert WTI-1 via the RS485 line to an RS485-to-TTL converter (purchased from eBay for a few dollars). The circuit of the beam controller interface is here. The project was constructed on Veroboard as a one-off with the layout found here. Also is a reverse image of the board to assist in cutting tracks can be found here.

Output to the G-800DXA beam controller is via transistors to isolate the PIC, with grounding (transistor low) the rotator pins causing movement. The PIC receives the HEADING

three places, firstly as information for the PIC when it has been instructed to rotate to a heading, secondly when it places the value on the LCD, and thirdly is sent back through the

internet to be shown as a beam heading on the Ham Radio Deluxe display.

The RS485 adapter has two connections for the A and B of the WTI-1, these go to the stereo socket in the WTI-1. RS485 is not a duplex device and therefore must be switched from receive to transmit by the output from Pin 18 of the PIC. It may be necessary to swap the A and B of the RS485 for correct polarity.

If a user wishes to switch the power of the radio an external driver transistor should be used to drive a relay. Sending a “O<CR>” switches power off while “P<CR>” turns power on.

Special thanks to Brian VK5VI for making my hand drawn circuits look professional. Brian also did the layout for the vero board and provided feedback on this article.

The board layout is top view.

I have written a program to provide control of the Yaesu rotator at the clubrooms. It is called “VK5SRrotate”.This sits atop the ShackLink software and enables control of the beam via virtual COM ports. Left/Right/Stop and Heading are available. In addition a Power ON and Power OFF facility is provided. It drives a transistor and a relay to switch a modem at the SERG site. Other people may have a different need. The power out pin is pin 2 of the output DB9 on my control box, active is high.

In use, I picture people using Shacklink with HRD sitting on top for general control. When beam control is needed run VK5SRrotate for changes to antenna direction. The rotator control in HRD does not support my hardware. Maybe one day it will, but for the moment VK5SRrotate is the only solution.

NOTE: If you use a 64 bit version of Windows you MAY need to run the program as Administrator to avoid possible error messages. If so there are instructions in the help file for VK5SRrotate on how to change the desktop shortcut to “Run as Administrator”.